Metabee is the mascot of the Medabot series. As a KBT-type Medabot, he is naturally suited to the Kabuto Medal and specializes in shooting attacks. Like his predecessor KBT-0, Metabee's head resembles that of a rhinoceros beetle with his single split-ended horn. He also features a much brighter color scheme than the older Medabot.

Metabee's attack style revolves around his many styles of shooting weapons. The Head Part contains a Missile with perfect accuracy and high power. The Right Arm Part, Revolver uses a semi-automatic Rifle for quick and accurate strikes. The Left Arm Part, Submachinegun features a rapid-fire Gatling for heavy assault. As a bipedal Medabot, Metabee is perfect for dominating grassland and forest battlefields.

Metabee is short for his original model name, Metal Beetle.

During the events of Medarot 2, Metabee is Ikki's first Medabot, given to him by Henry who sells Ikki a Tinpet and parts instead of a Retort Curry after his mother sends him to the store with a sum of money. However, despite his best efforts, Ikki can't make Metabee work, as he was given no accompanying medal. After his subsequent scolding by his mother, his father brings him back a Kabuto Medal, who unbeknownst to Ikki, had been given to his father by the elusive Phantom Renegade.

Metabee appears as a default character in the Medarot 3 game, already in the ownership of Ikki. Shortly afterward, his parts are upgraded and replaced by the new KBT-type Saikachi's Medaparts.

Metabee doesn't appear as the player's main Medabot, as Ikki already upgraded Metabee to Saikachi. However, he does appears as an opponent. One example of this is a scientist in the Medabot Corporation uses a Metabee with a King Medal.

Since the game is a remake of Medarot 2, the context where Metabee is a character is the same as in Medarot 2: sold to Ikki while appropriating his dinner money. The only major difference is that Metabee's serial number is correctly stated as KBT-1.

Main Article:Metabee (character) In the television series, Metabee is a KBT-series Medabot belonging to Ikki Tenryou, specializing in projectile weaponry and revolver tactics. Although outdated, he also possesses a rare Kabuto Medal which grants him to access the Medaforce. He is known to be quite aggressive and stubborn, and often causes problems due to his headstrong personality. He is often disobedient to his owner Ikki, but shares a close bond with him, and so, Ikki trusts him deeply.

The "Metabee" model is known to have had at least one previous owner, Henry, who had commanded one during at least one world championship event during which the infamous "10 Days of Darkness" occured.

As Metabee's Medal is especially rare and unique in the anime series, he also possesses the ability to use the powerful and devastating Medaforce, which he fires out of both of his arm cannons simultaneously usually accompanied with the exclamation of "IT'S TIME! or "KISS YOUR BOT GOODBYE!" then shouts MEDAFORCE!!". Upon first summoning and utilizing the Medaforce, Metabee is heard echoing the line "Dude, I rock", which quickly becomes his catchphrase, echoed in the background during most of his subsequent assaults with the Medaforce, and before then, after winning a Robattle.

As Metabee is a Beetle-type Medabot, like others of his attribute, he has a passion for watermelons, as revealed by Henry after he attempts to bait Metabee with the said fruit. Personality wise, Metabee is headstrong and often extremely arrogant and overconfident, but until he learned how to be nice to people and always loyal to his friends, even when he would rather leave them to their own punishments. His stubbornness and refusal to give in are key aspects of his character and he also doesn't want anyone to touch neither take his Medal away from him.

In the anime, he is played by the following actors:

Metabee has a rare holofoil card in the starter set of the Medabots Trading Card Game. He uses a "Piercing Shooting Attack" which allows him to damage Medabots to the side of the target if the target is destroyed.

Metabee appeared as a playable unit in a February 2019 event from Super Robot Wars X-Ω.

"Want some? Come and get some." 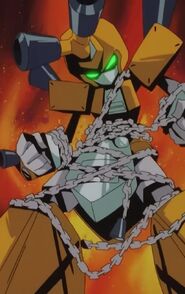 Retrieved from "https://medabots.fandom.com/wiki/Metabee?oldid=21338"
Community content is available under CC-BY-SA unless otherwise noted.